Tonight at the Avalon Theater at LoveFest 2018:

METROPOLIS
One of the biggest, strangest, maddest films in cinema history.
Fritz Lang’s 1927 film is a crazed futurist epic, a mythic sprawl and dystopian nightmare

In order to see the movie, please turn your video on and simply touch the screen.

She had taken the position at the Sanitorium believing that she would be working in the library. She had just finished her training at Arkham University and looked forward to assisting the doctors in their research. Instead, she found herself with a few dozen tattered volumes of questionable origin and spent her days as little more than a glorified receptionist. She registered arriving patients, took a brief history and ushered them through the doors to the attendants in the exam rooms.

The incoming patients seemed to have a common complaint. They heard scuttering sounds and saw movements out of the corners of their eyes. Many of them dreamt or imagined that worms or arthropods were moving through their walls or under the ground where they walked. She was sure her old professors would say the populace was suffering from mass hysteria. She paid the stories no mind… until the night that she heard it.

She felt herself being drawn inexorably out into the foggy night. She walked down the steps from the Sanitorium and between the buildings, following the trolley tracks till she saw broken pavement and something odd on the sidewalk.

As she knelt to examine it, she found herself caught up in entwining tendrils. She watched as multilegged creatures pushed up through the opening in the sidewalk. She waited as the sky turned to a mass of writhing clouds. The brooch at her collar started to move and she realized that Cthulhu was not in a book, but in the sky above LoveFest.

Eclectica is a shop that specializes in .jewellery, shoes, glasses, gloves, feathers, furs, hats, accessories. Tiffy Vella is the designer and she is definitely making us mad with delight over these glasses and horns. Both sets of glasses are available in Eclectica’s Lovecraft festival store. The horns are available in gacha vendors and you will love all the colors and styles. Both glasses and the horns are copy/mod. You might as well buy the whole set! Marketplace    Flickr

via In a Nutshell…: I wear my sunglasses at night…. 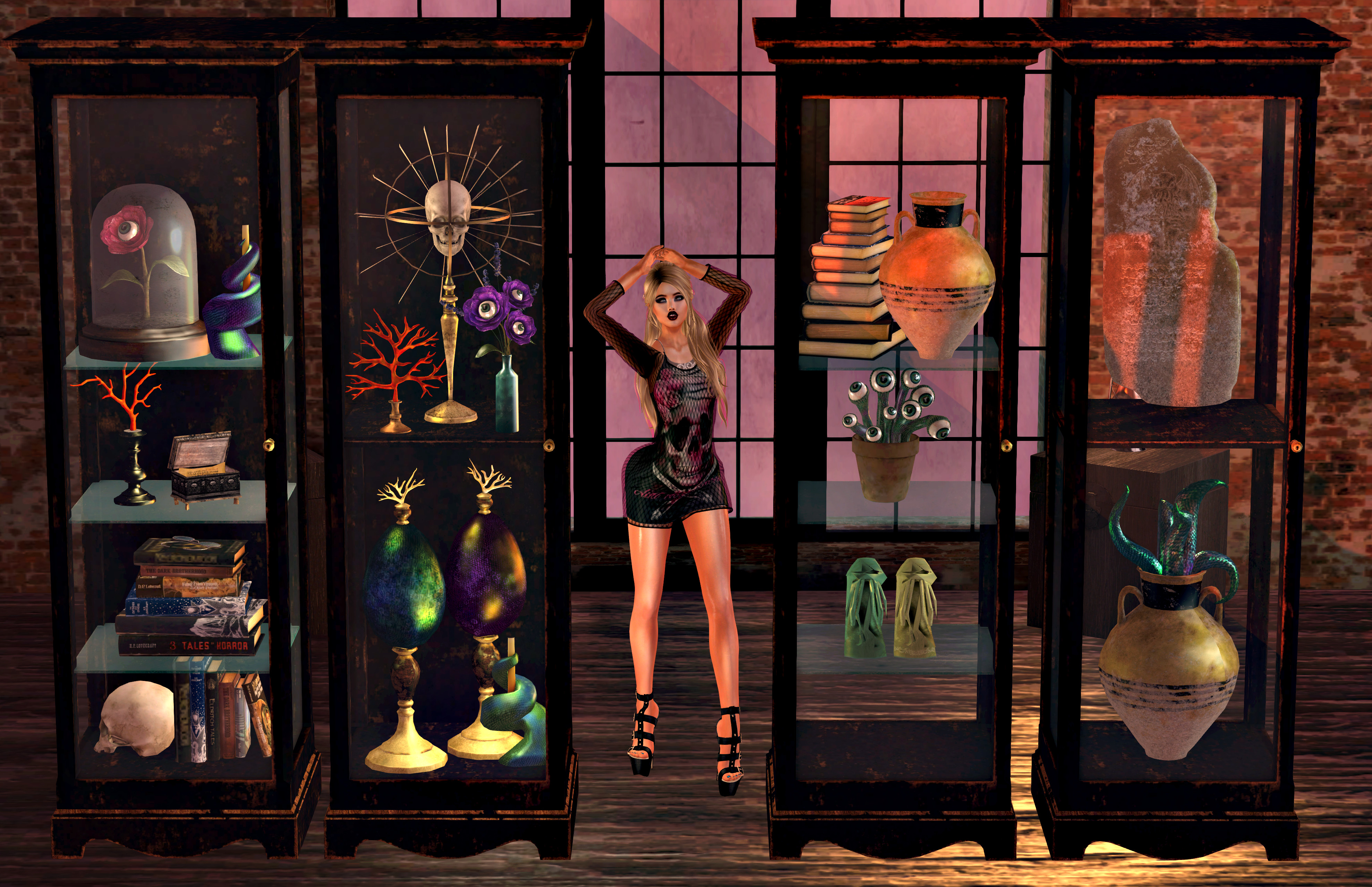 ❤ Decor ❤
The Lovecraft Festival is running. And [noctis]* makes sure that we all can decorate our homes in a special way. Look at those amazing decorations and imagine how they would look in your sweet home – I am sure you will grab the next taxi to the Lovecraft Event and get them :-)

via Selena – My Sexy Second

Streaming at the Avalon Theatre now:

HAXAN. See the movie that scared even Mr. Lovecraft.

Your ticket to ride: http://maps.secondlife.com/secondlife/Ravenheart/64/124/522
Or , from the landing walk into the West towards the Gypsies of Ulthar – there in the street its the last building on your left.

Touch the screen to begin viewing.

In Ulthar no man may kill a cat ~ The Cats of Ulthar by H.P. Lovecraft

H.P.Lovecraft was a cat lover. There are a number of cat fanciers among the organizers and presenters at Lovefest.
The most obvious is Arik Metzger, Founder of HPL-RPG  Group, the annual HP Lovecraft Festivals and the Innsmouth Preservation Society, but probably more importantly, the assistant, butler and occasional companion of Fuzzbutt (left), who is the most photographed feline in SL and possibly an Elder God.

In the center of Lovefest you will find C.C.L. El’s Cats selling Vampy cats and other supernatural breeds, blue tabbies (Fuzzbutt Tribute Kitties) and LE Lovefest KittyCat collars.
Purchase of the blue tabbies or the collars helps support the Innsmouth sim and future Lovecraft events.
If you visit the gypsy camp, you’ll see a tribute to the Cats of Ulthar. Petting the giant cat will give you a shoulder Kitty which answers yes and no questions.
Here you can see both my Vampy cat wearing his Limited Edition collar and the free Ulthar oracle cat.
Below you see a close up of the shoulder cat advising me as I browsed in El’s store.

When you make a mistake do you correct it immediately or just apologize and let it be? For me I have to step up especially in blogging and correct my error ~ besides being the right thing to do ~ am one that will own my mistakes ~ like this set of Lilith’s Den “LD Half Wall & Column – Aquatic Mystic Creatures” as I was not aware this was first an exclusive for the LoveFest and secondly sold as a set of 10 half walls with a column ~ the owner Runa (alrunia.ahn) was kind enough to point this out to me saying it was no biggie ~ to me I was embarrassed and it was a biggie ~ that is why am showing you each of the 10 half walls that you will get with this exclusive set ~ am showing it this way because again I do have to admit am not a builder by any means LOL ~ for those that are this is really interesting, unique items ~

“Failure is the key to success;

each mistake teaches us something.”

via correcting a mistake… – … all about “Stuff”…

Lovecraft Festival 2018 is in full swing…story time, dancing, spooky areas, and so many festival stores to sink your lindens into. Daily entertainment takes place on the Lovecraft sim and yes, there is something for everyone. Surprises lurking around every corner and you might even catch Fuzzbut wandering around. Wander on over to the Lovecraft Festival and fulfill your darkest fantasies!

via In a Nutshell…: The Path to Madness…

Its that time of year again – H.P. Lovecraft’s Birthday which of course means IT’S LOVEFEST TIME
Lovefest brings together all the designers and Vendors who love the weird, the creepy and horror side of literature and was born in Providence, Rhode Island.  Come and enjoy the events which are so varied from Live music, to DJ’s to Shopping, Tram Rides, Tentacle Traps and lots to see and do including the annual Hunt.

If you do not know who Harold Phillip Lovecraft was, he was a writer of short stories, poetry and novels from the early 1900’s. He was Born on 20th August 1890 and would have been 128 this year, he passed away in March 1937,  He reached a state of fame after his death and died quite poor.   Short story writer, editor, novelist, and was classified in the following Genres – Wierd Fiction, Horror Fiction, Science Fiction, Gothic Fiction, Fantasy Fiction.  He reached fame after his death through his published works and is now thought of as one of the most symbolic writers in his Genre at that time.

Take a look at some of the links below the pictures and come and have a look about, have some fun, take some pics and check out the fantastic creations from the awesome designers and creators as well as the awesome sim designers who have designed this awesome event.

LoveFest 2018 Information “The Path to Madness”

Blog         Facebook           Flickr
As with other events and festivals within Second Life…LoveFest features a wide variety of designers that cater to the dark side. Clothes, accessories, household goods, and so much more is available on the LoveFest sims until August 26. One such designer, Beyond the Dark – BtD, has created some delightful items for your humble abode. BtD creates buildings, furniture and decorations leaning towards the dark side. Dark romance: here you will find Romantic furniture but with small things that tell you this is for the lover of the dark side of life. BtD has created A Captains memoirs furniture set featuring a chair, night stand, dresser, and portal. Surprises await those who choose to delve inside each item. Sold as a full set exclusively @BtD – LoveFest Store.

via In a Nutshell…: LoveFest has started….